The Jewish families descended from Jacob and Joseph
had moved from Canaan to Egypt to live.

They had more children, and their children had children until there were too many to count.

A new Pharaoh (King of Egypt) came into power.  He was afraid that there were so many Jewish immigrants that they would one day take over the land. So he saw they were given the worst work and plenty of hard labour, making them into slaves.

Pharaoh still wasn't satisfied.  The Israelites were still growing in number. So he made a law that all boys born to the Jewish families were to be killed.

At this time, there was an Israelite couple who were expecting a baby.  When they had a baby boy, they wanted to save their beautiful, precious child - so he would not be put to death. They managed to hide the baby for three months.

When he could not be hidden any longer, his mother put him in a basket made of "bulrushes" and placed it among the reeds and rushes by the river bank.

The daughter of Pharaoh came down to wash at the river that day. She saw the basket with the baby inside.

When she opened it, the light startled Moses so he woke up.  "What a sweet, beautiful little baby.  He must be an Israelite," Pharaoh's daughter said to her servants.

Moses’ sister, Miriam, had watched from a distance to see what would happen to her baby brother. Now Miriam hurried over and asked, "Would you like me to find a woman to feed the baby for you?"

Miriam ran as fast as she could and told her mother that Pharaoh's daughter had found him and wanted someone to come and nurse him.  Miriam & her Mum went back, found Moses with Pharaoh's daughter, who asked, "Nurse this baby, and I will pay you for helping me."   (She didn't realise that this was actually Moses' mother).  Pharaoh's daughter took and adopted the baby as her own son, and that's when she named him Moses, which means "out of the water."

GOD'S PURPOSE FOR US

For I know the plans I have for you, declares the Lord, plans for good and not for evil, to give you a future and a hope.  Jeremiah 29:11

He saved us and called us to be his own people, not because of what we have done, but because of his own purpose and grace. He gave us this grace by means of Christ Jesus before the beginning of time.
2 Timothy 1:9

The Lord Almighty has sworn this oath:" It will all happen as I have planned. It will come about according to my purposes." Isaiah 14:24

Even before the world was made, God had already chosen us to be his through our union with Christ, so that we would be holy and without fault before him. Because of his love God had already decided that through Jesus Christ he would make us his children — this was his pleasure and purpose.
Ephesians 1:4-5

We know that in all things God works for good with those who love him, those whom he has called according to his purpose. Romans 8:28

This story of Moses being rescued from the basket in the reeds just goes to show that God is always looking out for us.  God knew His plans for Moses even then, just like He knows the plans He has for us.  It's so great how we can look back at our lives and see God's hand in every situation. We may not understand why things happen but who better to trust your life to than God?

One day, Jesus told his disciples to go across the lake Galilee in a boat. Jesus did not go with them because He was spending time on his own praying to God

Looking at this picture, let’s think about how we would feel being on this boat.  What things in the picture make us feel this way?

Late that night the disciples were in the boat in the middle of the lake.  They were in serious trouble.  They were rowing hard and struggling against the wind and high waves.  Even though these men were used to being in boats, they may have been afraid of the waves and wind.  The boat was probably rocking violently.  The disciples may have even worried about falling overboard.

Right in the middle of the night, they saw someone coming toward them, walking on the water. They were very scared and thought they were seeing a ghost!

The person wasn’t a ghost.  It was Jesus!  He is so powerful that He could walk on water!  Then Jesus comforted the disciples, by telling them; “Don't be afraid. Take courage. I am here.”

Jesus climbed into the boat, and the wind stopped.  Jesus is more powerful than the wind!

We can imagine that the disciples probably felt afraid of the big storm in the middle of the night.  But Jesus calmed their fears.  The disciples learned that Jesus was more powerful than anything that was causing them fear.

Closing Prayer
Dear God, Thank you for being my strength and ever-present help in times of trouble.  Sometimes it’s hard to be brave or believe, especially right now with all that’s going on in the world.  Just as you told the disciples to take courage and fear not, I ask you to help me to put my trust in You, instead of in myself and not to be afraid - knowing that you will protect and save me.

THINK, FEEL AND DO

What we think and what we feel really influences what we do (the actions we take).That’s why what you think about matters, because it is forming the basis of who you will become.

God gives us free will – which means that we have the choice to choose whether we do right or wrong. Doing wrong always makes us feel bad in the end as we know that what we are doing is not pleasing to God.

The Devil = Tries to influence us to do bad things

God = Only tells us to do right things, loves us more than we love ourselves

This is why it’s always good to Listen (especially) to our Parents& Elders – as God has given them the job to grow and teach us.  Sometimes what they say may not always be very nice but they don’t mean it. They just want the best for us, and because they have been around for longer than us, they have been through experiences that they don’t want us to go through.  The Bible talks about respect: –Honour your father and your mother, that your days may be long in the land that the Lord your God is giving you.  (Exodus 20 v12)

Here are my thoughts on the word listen.

They accepted a wrong thought.  They believed the devil's lie instead of believing God. Adam and Eve did wrong.  They ate the fruit of the forbidden tree and did not listen to God’s instruction.
Adam and Eve felt fear, guilt and shame.  Doing wrong always makes you feel negative.
The wrong thought they accepted from the devil led to a wrong action, and the wrong action led to wrong feelings.

So the moral of the story is;  don’t allow wrong thoughts to take over your mind.  If you do end up doing something wrong, try and make it right as soon as you can and then pray and tell God what you have done and tell him you’re very sorry.  Also apologise to the person you have done wrong to, and try your hardest not to do that wrong thing again.

As I mentioned earlier, we all have choices - to choose to do what is right or wrong.
Thinking right thoughts will lead to right actions and automatically we will have happy (right) feelings.

When you realize how much God loves you, it will make you want to love Him with all your heart. That is what God wants you to do.  The Bible says, "We love Him, because He first loved us."  1 John 4:19

Say this out aloud twice whilst looking at yourself in the mirror; -  "God loves me. God respects me.
I am very precious to Him. I want to be His child forever." 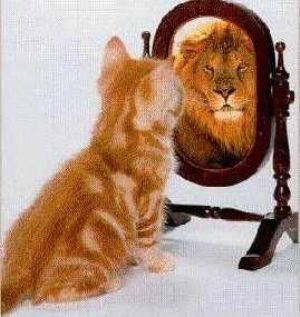 Dear God, I feel bad about myself because I don’t always do the right things.  Sometimes I make mistakes and do things that hurt people.  Sometimes I don’t do good things that I know I should.  I confess this to you and am truly sorry about it.  Help me to remember that you forgive, and to know in my heart that you aren’t holding my mistakes against me, but that you want to help me make better choices next time around.  Thank you for giving me a fresh start, Jesus.  Amen