Following a visit to Bethnal Green hamlet in 1777, John Wesley drew attention to the appalling poverty that existed in this area.  In various ways over the last 150+ years, the local Methodist Church has fed the hungry, supported the poor, provided education, taken in homeless children and been a place where people of all backgrounds and ages could find a welcome and a safe space.

Celebrating 175 years of service in 2018, QVSR started life as the Seamen’s Mission of the Methodist Church in 1843. Known originally as the Wesleyan Seamen’s Mission, the aim was to minister to the spiritual needs and promote the social and morale welfare of seafarers and their families in the vicinity of the Port of London.

​On Good Friday 1868, the original Approach Road Chapel opened its doors in Bethnal Green.  With the main entrance on Bonner Road, the church was built in classical style with pediment and massive Corinthian pillars, seating 1,000. Attendance in 1886 was said to be around 500 morning and evening. 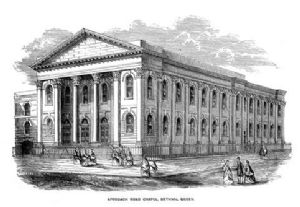 The church became closely associated with the adjacent Children's Home in Bonner Road, whose founder, the Rev Thomas Bowman Stephenson, came to be minister at Approach Road in 1871 when the Home opened, and, from 1893, was superintendent of the (then) Victoria Park Circuit. 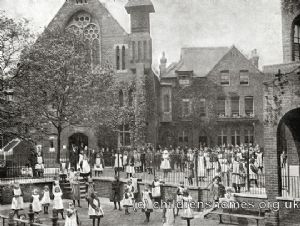 The National Children’s Home and Orphanage  was also the catalyst for what we know as the present-day Methodist Diaconal Order (MDO), for it was Thomas Bowman Stephenson who pioneered the special role of women as set-apart missioners, known as “Sisters”.

Bombing in 1940 killed the minister, the Rev’d W Gilbert, and two deaconesses, Sister Evelyn Palmer and 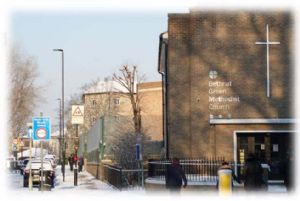 Sister Evelyn Harrison, in the Manse, and further bombing in 1941 destroyed the original building completely.

Reopened with a new (smaller) building in 1959,  in 2019 the current church has plans for major redevelopment to continue “to serve the present age”. 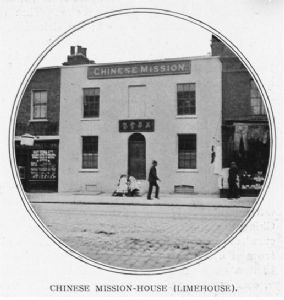 In 1883, the Rev’d George Piercy founded the Chinese Mission at 92 West India Dock Road in Limehouse.  On his return to UK after 30 years in Canton, he still wanted to help the Chinese.  There were seamen from the London Docks, but immigrant Chinese had also recently begun to settle in Limehouse, running restaurants, grocery stores and laundry houses where the lime was used specifically to bleach clothes.

In 1885, the Wesleyan Methodist Church established its first mission in Cable Street, Shadwell in recognition of a need for new ways of working in the East End of London, aiming to combat poverty and squalor with a combination of evangelism and social work. This developed into the East End Mission which used innovations such as hiring secular premises, like the Old Mahogany Bar at Wilton's Music Hall, as new-style mission halls.   A new Stepney Central Hall opened as headquarters of the Mission in 1907.

Still needed as much as when it was founded , “since 1876, The Whitechapel Mission has been called to serve the men and women caught in the cycles of poverty, hopelessness and dependencies of many kinds, and to see their lives transformed to hope, joy and lasting productivity.” Its  day care centre is open 365 days a year and would expect to see between 150 and 200 people on a normal weekday. Of those, 49% are from the UK, but predominately from Scotland and Ireland.  19% are Eastern European. 20% are Afro/Caribbean, mainly from North African states. 5% British born Asians and the final 7% are a mixture from around the world. Night shelter is not the norm but is offered when the temperature drops around freezing

The Methodist Church exists to serve the community around it and beyond. There has been, and still is, plenty of work to be done in the East End!