The Whitechapel Mission has its own excellent website maintained by the Director, Tony Miller.

AT THIS TIME IT IS VERY DIFFICULT FOR THE MISSION TO TAKE IN YOUR USUAL DONATIONS OF GOODS.  SUPPORT IN THE FORM OF MONEY WOULD BE MUCH APPRECIATED, SO WE CAN BUY NECESSARY SUPPLIES.  Thank you.

Here's George - a new member of the day centre staff  –  pictured in the kitchen. The Mission is expanding its front-line team in order to cater to the growing needs of the hundreds of men and women visiting every week. Meet Chan, the new deputy director. Chan joins the Mission at a challenging time for both staff and clients.

We are doing everything we can to make sure guests, volunteers and staff are safe.. None of our guests has currently been effected by the COVID-19. Our Office Support team is on hand in case you have any questions, and can be reached on  03000 111 400 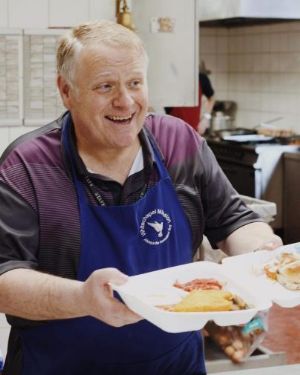 We are suspending all volunteering and outside service provision. Our current evaluation of risk is that people should not be travelling to the Mission unless absolutely essential. Food is the highest priority for those sleeping on our streets. We are issuing packed lunches as well as our usual breakfasts.  There's a new regime, but we keep going! Warm clothing, medical attention and support must be sustained as long as possible.
The Mission remains Open and Serving

Running costs per day are about £2,000
The Mission receives no state aid

The Mission day care centre is open 365 days a year and usually serves an average of 297 breakfasts per day.
Currently we are serving about 200 breakfasts and, additionally, providing packed lunches

9th January 2020, Tony was the guest speaker at the Conversation following Evensong at St Mary-at-Hill Parish Church in Billingsgate, by the Monument. The group was impressed by Tony's 40 years experience and stunned by his continuing enthusiasm and passion.

November 2019  The President of the Methodist Conference, Dr Rev Dr Barbara Glasson, preached at the annual service for supporters of the work of the Mission with homeless and rootless people.

October 2019 The Mission hosted the Methodist City Centre Network. We welcomed people from all over the country who work in city centre churches.   There was a chance to share the work and challenges of Whitechapel Mission with  our colleagues and friends from around the Methodist Connexion.

September 2019 The Circuit's Harvest Festival gifts were sent for the benefit of the Mission.

August 2019 One Tin at a Time  There are boxes in each church where you can leave your gifts or let Rev'd John Hayes (07531 243327)  know when you have something to collect, and he will take it down to the Mission. Every little helps.

Cameron chaired his last Whitechapel Mission trustees meeting.  He was warmly thanked for his service.  The transformation of the group during his tenure over the last couple of years has been significant. Cameron was able to pass on the Chair of Trustee role to Michael Spurr, and was delighted to leave the Mission in such competent hands. The trustees offered their thanks for all of Terry’s work and support. It was also the last meeting for long-standing trustee Terry Simco.  Terry is well known across the Circuit, especially in his involvement with QVSR.

Spring 2019  Whitechapel Mission in rail initiative to tackle begging
The Mission is working with the London Overground rail network to discourage passengers from giving to people begging on the network’s walk-through trains, but instead to make a donation to the work of the mission. Posters on the stations and notices in the carriages say: “To help someone you see begging on London Overground, donate to the Whitechapel Mission. Any donations will be used carefully and your generosity will be welcomed”. The Whitechapel Mission - part of the Tower Hamlets circuit - is just minutes from Whitechapel station which serves the Overground, District and Metropolitan tube lines (and Crossrail at a future date). The mission currently provides breakfast for around 250 homeless men and women a day, together with essential advice services. Mission director Tony Miller said they had entered into discussions with London Overground because of the amount of complaints the train network had received about the high level of begging. So far, donations to the Mission have raised up to £17,000.

Vice-President of the Methodist Conference 2016-17, Rachel Lampard, reflects on her visit to Whitechapel:The Mission is an impressive feat of organisation - feeding huge numbers of vulnerable people, co-ordinating thousands of volunteers, receiving and sorting donations of food and clothing from

churches all over the country; but it is so much more than that. It is the Church in action; it is an outworking of God’s love. People in terrible situations are welcomed, known by name, helped to cope and to overcome huge obstacles, to see that things can be different. Tony Miller, director of the Mission, said to me that it is vital that the two elements of the Mission - the worship and the charity - are not seen separately. Both are church.

Rough sleeping is rising across the country, as are the numbers of homeless people in temporary accommodation. Over the last year, the centre has seen a third more people than it did the previous year, all at a time when prices are going up and budgets are shrinking. Donations to the mission from harvest festivals have been coming in, but we were told that the tins of baked beans, which in previous years had seen them through the year, were already running low, and there was also a desperate need for razors. The Mission depends entirely on voluntary donations. So how about donating the cost of a couple of catering tins of baked beans and a packet of razors? And in rain and cold temperatures pray for those who cannot escape them.

Back to Social Ministries